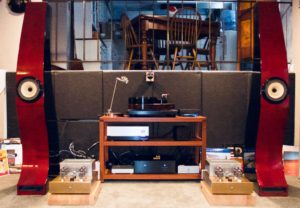 Are the TriangleArt Reference Tube Monoblock Amplifiers luxury audio, world-class audio, or state-of-the-art sounding amplifiers? Make no mistake about it, the answer is all three. Becky looked down at these amplifiers and said, “Those are really beautiful.” I don’t think I have ever heard her say any piece of electronics was beautiful. No, I take that back. She also thinks the TriangleArt turntables are gorgeous—they remind her of jewelry, but that’s an entirely different conversation. These amplifiers share another important distinction with the TriangleArt turntables, they don’t just look good, they also sound wonderful. I’ll just say here in the introductory paragraph, the TriangleArt Reference Tube Amplifiers are the best KT88 tube amplifiers I have ever heard by a long shot! 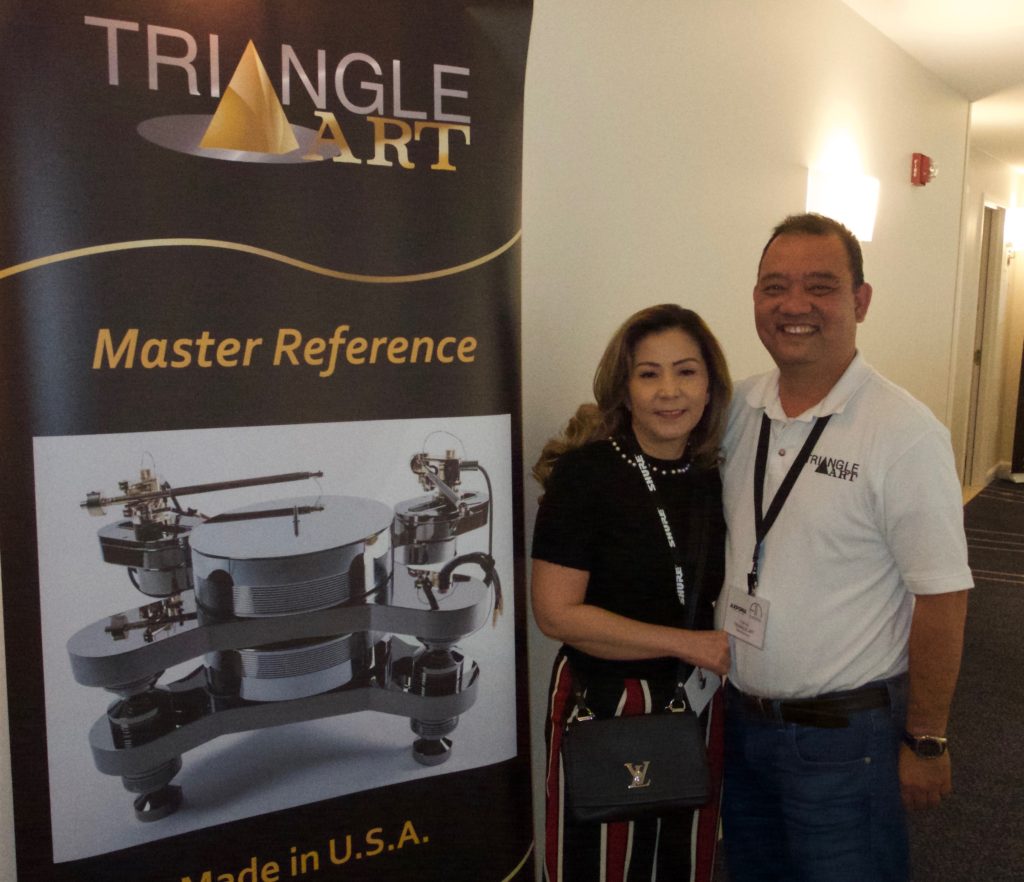 Pictured here are Tom Vu and his lovely wife, Kelly Phan, at AXPONA earlier this year. We happened to be staying in the room next door to them at the show, and we got to hear their system very well and very early, but it sounded really good.

Tom is the founder of TriangleArt of Anaheim, California. Vu came to America at the age of 12 and is one of the nicest and most humble gentlemen I have ever met. He is also one of the most focused audio designers around. Everything he designs and makes has superb fit and finish, and it is made from the best parts available for the job. One thing is sure from both his turntables and electronics, his products speak to both his eye and his ear for beauty.

Vu expanded from turntables to include tube electronics when he debuted his Reference Tube Amplifier, Preamp, and Phonostage at The Home Entertainment Show Newport in 2016. I have a tendency to think that people should stick to what they do well and focus their energy and attention on it. I have to admit I thought it was turntables that Vu did well, but I had not given him enough credit. It is now obvious that he has the ability to put together design teams that can produce world-class products. In this case, I have had the privilege to listen in my home to a pair of his world-class monoblock amps. 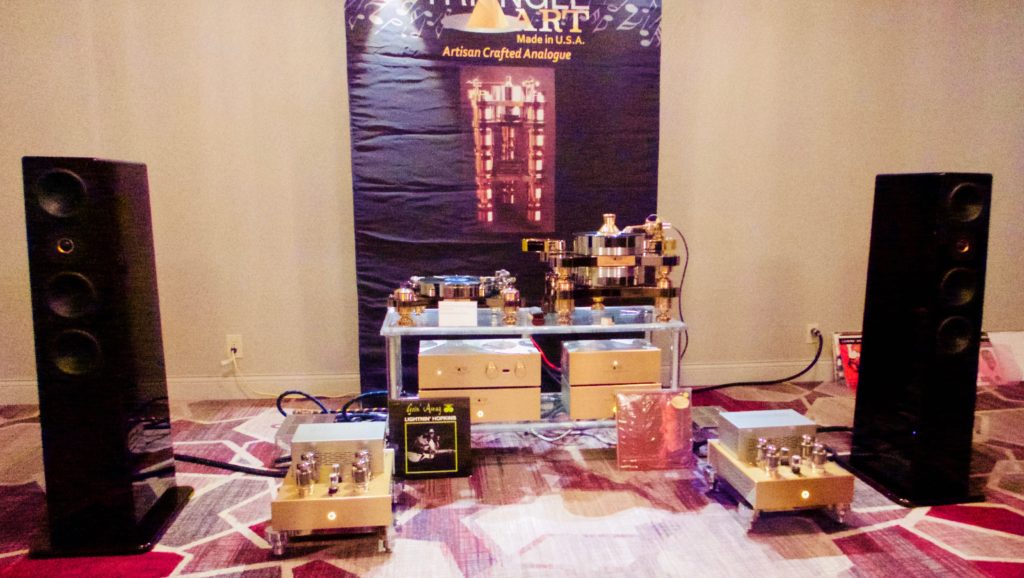 At the California Audio Show this year, I awarded the Beatnik Bongo Award for Best Sound to the TriAngle Art and Angel City Audio room. When in the listening to the room for the third time, Vu asked me if I would like to take the amps home to review, and I jumped at the offer. The system at the show combined as good or better audio effects as I had heard, and they had the most magically musical sound I could ever want. In fact, for the award I wrote, “I really don’t know what more to say about this system other than it was one of the three most musically satisfying rooms at the show. Combine this with having as good or better audio effects and the most magical and quietest sound from LPs, and you have the room that did more things right than any other room at the show.” 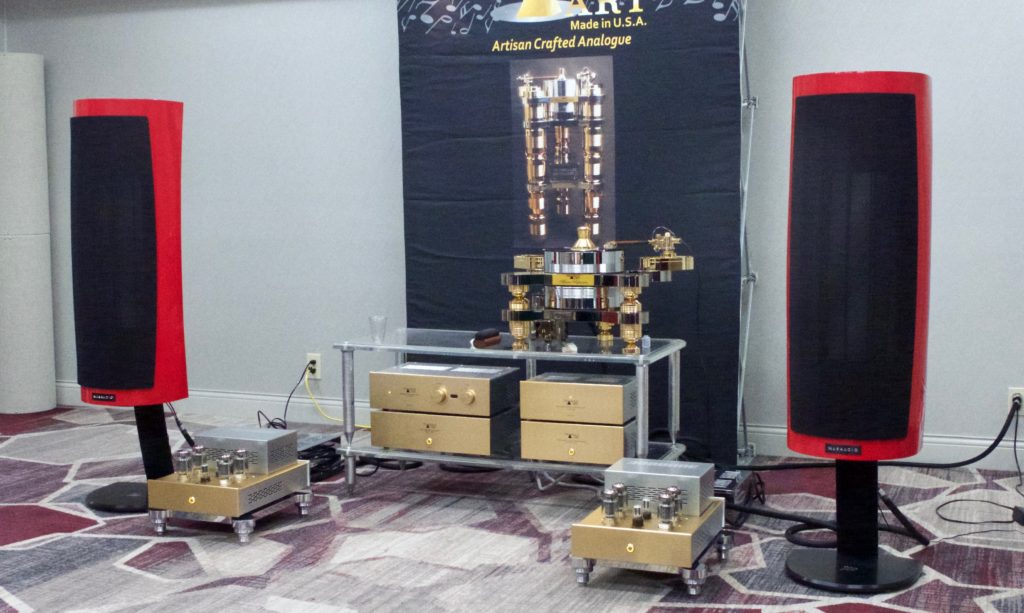 When I went to pick up the amps as the show was wrapping up, the people from Muraudio had brought down their SP1 Electrostatic Loudspeakers to hear with the TriangleArt’s electronics and turntable system. I think the real question was how the Reference Monoblocks would drive the difficult load these speakers put on an amplifier. On this short listen, I was impressed with how much better they sounded with these amps then they had with the powerful transistor amp they had used in the Muraudio room. So, I heard these amps on two different speaker systems at the show, and I was very impressed with the sound. At home, I used them on three different speakers, my Teresonic XRs, my Audience 1+1s, and the Legacy Audio Calibre Speakers. After listening to these amps on so many different speakers, I feel I have a real grasp on how they sound. 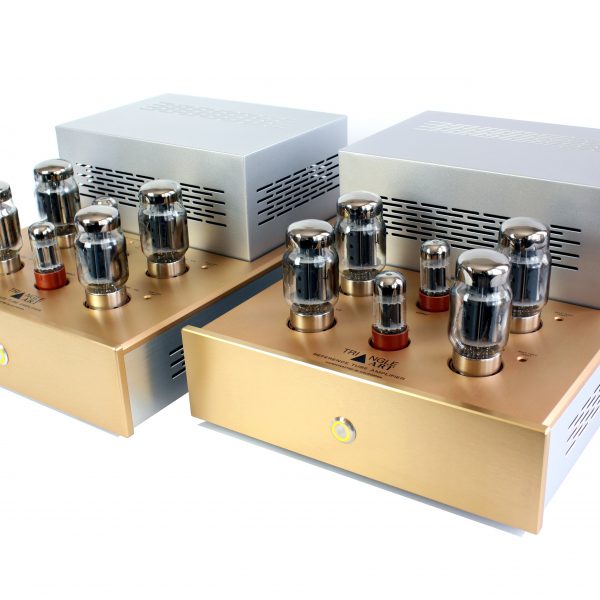 The Reference Tube Amplifier runs in ultra-linear mode and uses four KT-88 output tubes and two 6SN7 driver tubes per channel. They are rated out at 160 watts of power without pushing the tubes to their limit. Biasing for the output tubes can be done using the bias trimmers and measuring points. It’s easy since everything can be accessed on the top plate of the amplifiers. Vu has the power and output transformers custom wound in the USA.

The Reference Tube Amplifier operates as a Class A push-pull monoblock amplifier. The main chassis of the Reference Tube Amplifier is constructed of 3/8-inch thick aluminum panels. Each piece is CNC machined to their specs and then hand polished and anodized in silver and gold to create the elegant looking two-tone finish. I mentioned above that Vu is really focused on fit and finish. He even has the speaker binding post custom made. There’s also a high-quality RCA and XLR input on the back panel. 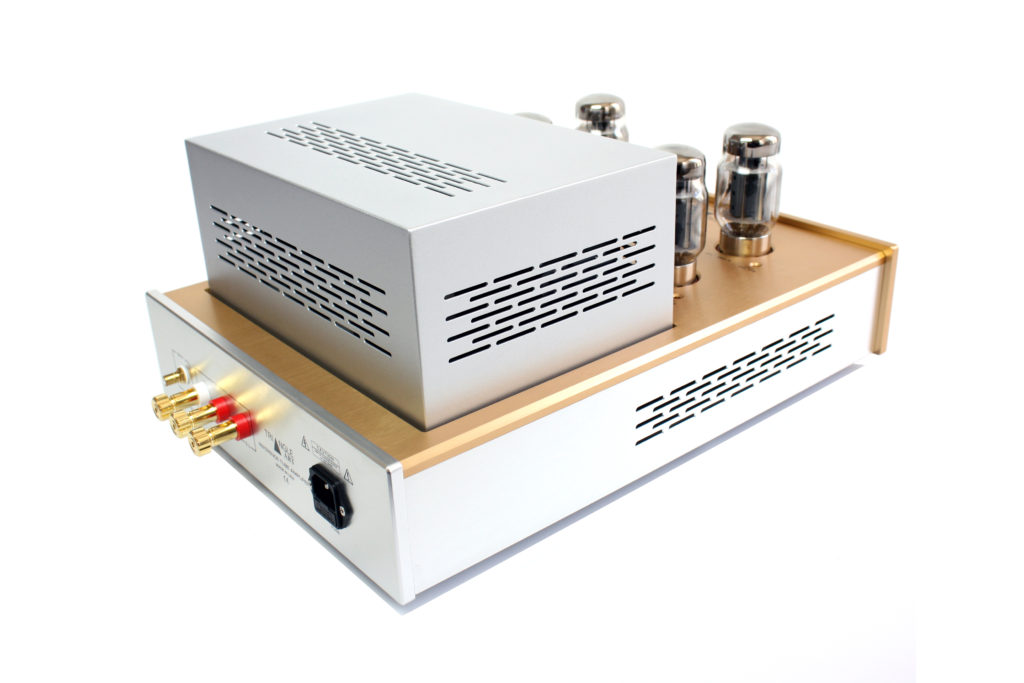 After unpacking the amps, I set them on a pair of Michigan maple hardwood amp stands from Butcher Block Acoustics, a product we came across at The SHOW and plan to review.  Setting up amplifiers is pretty straightforward. In this case, I removed the Duelund speaker cables and interconnects I had in my system as well as the Audience Au24 powerChord from the First Watt SIT 3 and hooked them up to the Reference Monoblocks. Of course, I also had to add another Audience Au24 powerChord. The see the rest of my review system, click here. 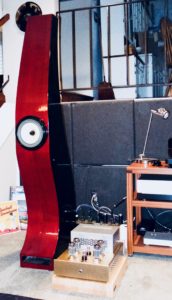 Having listened to the TriangleArt Reference amps on five different speaker systems, I can say that with each the amps allowed the speakers to have real finesse, articulation, detail, and refinement. I really liked the Reference Amps with the Legacy Audio Calibre Speakers. The Reference amps driving the Calibres produced the kind of imaging and soundstage specificity I expect from a world-class system. With each of the other five speakers except for the tiny Audience speakers, they produced a wonderfully voluptuous sound with deep satisfying bass, and with all, there were satisfying tonal colors, spacial information ambiance, and refinement.

I want to also talk about how great my Teresonic XRs sounded with these amps. The Teresonic XRs are 104 dB efficient speakers that I thoroughly enjoyed with the little 1-watt LTA amp, so how would they sound with a 160-watt amp. The answer is they sounded fantastic. The sound was dynamic, full, and huge. What made it special though was that they had micro-dynamics and detail that were just as great as with the LTA amp. The bass had real punch combined with realistic air and decay.

Both male and female voices were very natural, articulate and alive sounding. With these amps, my Teresonics let me hear voices in a realistic space. They have that very special ability to make me feel like there is a human body present. Voices and instruments, especially solo instruments sound so alive and real. The only amps I have heard that could exceed them in this area are the WAVAC EC300B and the First Watt SIT amps, which produce what I call scary real voices. All of those amps put out less than 20 watts per channel. Truth is, I’ve never heard an amp with over 60 watts produce such realistic voices as the TriangleArt Reference amps, and remember they easily put out 160 watts per channel.

What I can say with confidence is that these amps are made, designed and voiced by someone who knows what real music sounds like. These amps let me hear the natural timbral textures of music in my home with beautiful tonal colors and outstanding tempo, which makes experiencing the emotion of music at home seem very real. 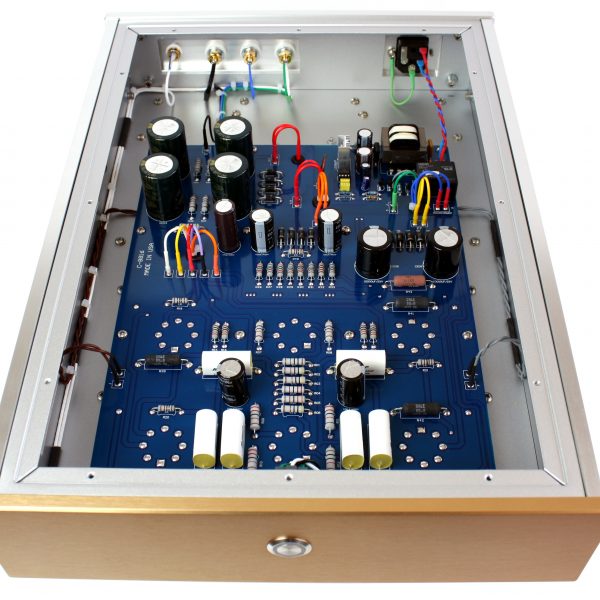 The TriangleArt Reference Tube Amplifiers are everything I have said. They are without a doubt really luxury audio and are world-class audio in every way, they are at the very state of the art in amplifiers when it comes to sound. The only other tube amp I have used that was built with this kind of state-of-the-art parts, fit and finish is the WAVAC EC300B which sells for $30,000 and has the output of 10 watts.

These monoblock amplifiers also present the timbre of instruments beautifully. They allowed me to hear the nuance, great tone and dynamics of music. They brought beautiful music into my room, and I will miss them. If you are looking for one of the best tube amps ever, you should hear these great amps from TriangleArt.